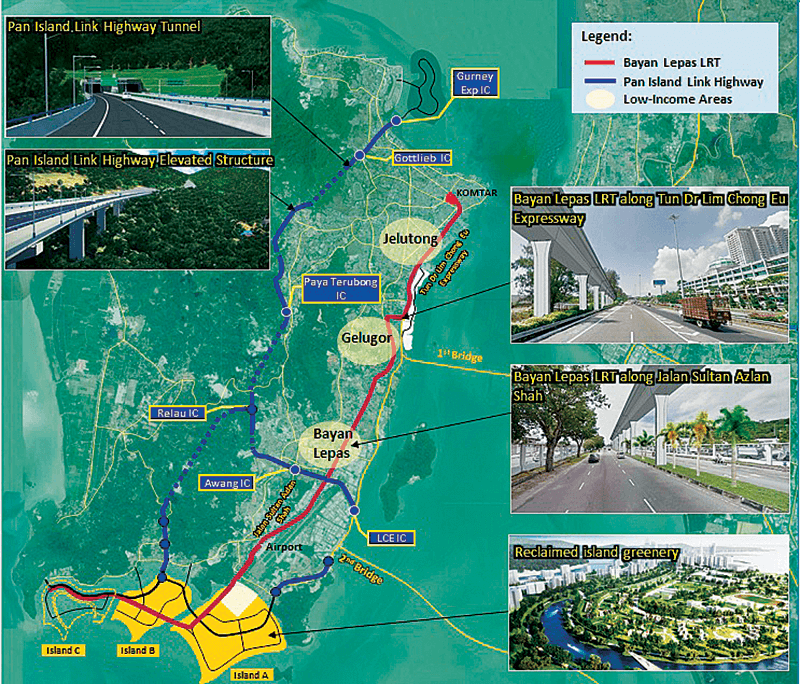 KUALA LUMPUR: Construction work on the Penang light railway transit (LRT) project, which is part of the first phase of the island’s Transport Master Plan (TMP), will start in 2018.

According to SRS Consortium Sdn Bhd, the Gamuda Bhd-led project delivery partner (PDP) for the TMP, it will be finalising the cost and alignment of the entire project by year end.

“We expect to start the construction of the LRT in 2018. It will take six years to complete,” SRS Consortium project director Szeto Wai Loong told The Edge Financial Daily in an interview yesterday.

It was previously reported by local media that the construction of the LRT project is scheduled to take off in the first half of 2017.

Szeto said the LRT project, which has a total alignment length of approximately 20 km, is one of the first components to be implemented under the TMP. The other component is the Pan Island Link Highway, which is expected to start construction in 2017.

He pointed out that the LRT project and Pan Island Link Highway were determined as the first components in the delivery sequence of the TMP as they fetch economic internal rates of return of 12.2% and 14% respectively, which are the highest among other components.

He added that the construction of the LRT project is expected to have minimal environment and social impact as the alignment runs past the LCE and Jalan Sultan Azlan Shah, which have a wide reserve.

“We are not acquiring a lot of people’s land compared to other [similar] developments,” he added.

Meanwhile, on the plan to reclaim two islands in the south of Penang Island, Szeto said the detailed environmental impact assessment report will be available to the public for review by mid-2016.

The reclaimed land will be fully owned by the Penang government and the land will be auctioned to finance the RM27 billion TMP.

“The public will have a month’s time to comment. It will take us another month to address all the issues that are relevant,” he explained, adding that the consultant had already started various studies that will take six to seven months.

He said various studies will be carried out to determine the marine and environmental impact, sea current and sedimentation impact, and socio-economic impact on the fishermen community in Teluk Kumbar, Permatang Damar Laut and Gertak Sanggul areas.

The report will be prepared by environmental consultant Dr Nik & Associates Sdn Bhd. Szeto said one of the concerns of the reclamation work would be the livelihood of the fishermen in the area as they have to travel farther for fishing activities.

“We haven’t got complaints about environmental issues. So far, we only have political issues,” he said.

Certain parties have questioned the Penang state government for allowing too many reclamation activities on the island, which raised concerns about the impact on the environment and marine life.

Szeto reassured that the chosen site is the best site for reclamation as there is no seagrass in the area.

Previously, the reclamation was said to be carried out in Middle Bank, partly a seagrass bed — a natural marine ecosystem and breeding spot for marine life — located near Gazumbo Island next to the Penang Bridge.

However, environmentalists and civic groups opposed the proposed project on the grounds that it had the country’s second-largest seagrass bed.

The Edge Financial Daily reported on Monday that the estimated cost for reclaiming the two islands measuring about 1,300 acres (526ha) and 2,100 acres respectively to be about RM7 billion to RM8 billion.

The reclamation, identified as a land swap model to finance the TMP, is expected to take off in 2018 once federal and state approvals for the project components are attained.

The proposed TMP would feature a LRT from Komtar to Bayan Lepas, a monorail from Komtar to Air Itam and Tanjung Bungah, e-buses across the North Channel, bus rapid transits on the mainland, and a 20 km Pan Island Link Highway connecting Tanjung Bungah to the Penang International Airport and the LCE with tunnels cutting through the hills.

SRS Consortium, a joint venture in which Gamuda holds 60%, with Ideal Property Development Sdn Bhd and Loh Phoy Yen Holdings Sdn Bhd holding 20% each, received its appointment letter as the PDP on Aug 14.