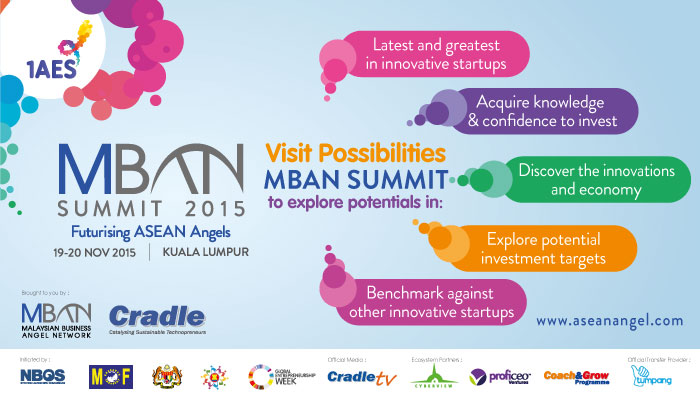 These are almost always initially led by high net worth individuals (HNWIs) with disposable income. Startups are a perfect match for such individuals.

But with the concept of angel investing still new to the region, even in Singapore which has the most advanced startup ecosystem in South-East Asia, it is still too early to gauge efforts to build this leg.

For instance, Malaysia has been trying to build its pool of angel investors since 2013, and even has what some claim to be the most generous angel tax incentives in the world.

But has this been enough in a country where aspiring startups must compete with a formidable and well entrenched competitor for the chequebook of these HNWIs, the property market?

Playing the lead role in convincing HNWIs that betting on startups can offer them more rewarding returns than the predictability of property investing is the Malaysian Business Angels Network (MBAN).

In line with its ambitions, it is organising the two-day MBAN Summit 2015: Futurising Asean Angels, in Kuala Lumpur from Nov 19-20.

Digital News Asia (DNA) spoke to MBAN president Dr V. Sivapalan to find out how the angel investment scene is progressing — or not — in Malaysia.

DNA: What does MBAN hope to achieve through this conference?

Sivapalan: We have three objectives:

Education and deal flow: Secondly, we will be providing more angel education programmes from 2016 onwards to educate angels on how to invest, how to evaluate deals, the mechanisms of doing deals, and the potential to make money from angel investments. We will start this by introducing our first programme at the summit, as part of our partnership with London Business Angels under the banner of the Angels In The City programme. We will also have pitching sessions to provide curated deal flows for our angels.

Cross-border collaboration: At the summit, we will also have angels from six South-East Asian nations (Indonesia, Malaysia, the Philippines, Singapore, Thailand, and Vietnam) as well as Australia, Hong Kong, New Zealand and the United Kingdom present, and we will use this as an opportunity to create potential collaboration between the angel groups in these nations and Malaysia. As more cross-border deals are beginning to happen, and as angels are starting to invest across borders. a collaboration between the angel networks in Asean will benefit the entire ecosystem in the region, and Malaysia as the chair of Asean, wants to play a role in creating these possible collaborations.

DNA: How would you have rated the angel scene in Malaysia in January? How about now?

Sivapalan: I think we have made significant progress in the angel scene in the last 10 months. In January, we had only about 30 or so accredited angels registered with MBAN for the Angel Tax Incentive.

Today we have exceeded 100 angels and the number is growing all the time. I think we will meet our target of getting 120 angels registered by the end of the year.

This shows that our awareness programmes are working and more HNWIs are considering doing deals as angel investors.

We have also instituted monthly pitching sessions for angels from June this year and over the last five months, about 25 companies have pitched their ideas to angels. We see a lot of interest … and we know there are many discussions going on at the moment between angels and entrepreneurs.

The angel scene is buzzing at the moment.

DNA: What has been the trigger for the current buzz?

Sivapalan: The initial trigger was the tax incentive, but I think as more angels started looking at the curated deal flows that we provide, there was a realisation that there are actually many good deals and companies to invest in, in Malaysia.

Before this, angels may have been interested but they did not know how to source deals and how to invest. Since we curate deal flows, we ensure there is some quality in the deals, and this has made the angels aware of good deals.

There is also increasing syndicated deal-making happening – that is, angels are getting together to collectively invest in deals, and as this reduces the risk and introduces more expertise and experience to deal-making, angels are more confident to do deals. We are seeing more angel clubs being formed for this purpose.

Finally, the success of companies like MyTeksi/ GrabTaxi has also shown that Malaysia can indeed produce good companies with good investment potential. [GrabTaxi is the Malaysian-founded, and now Singapore-headquartered, taxi-hailing startup.]

DNA: Is your biggest hurdle in promoting angel investing still that more money can be made from investing in property?

Sivapalan: We know that investing in property will always be there for HNWIs, but increasingly, we are seeing that there is interest in investing in entrepreneurial ventures as well. The returns from angel investing can also be significant, and the more sophisticated HNWIs are prepared to widen their investment instruments. This is starting to happen now.

Perhaps the … poor property investment environment today helps us in promoting angel investing. But once they have had a bite of the cherry, we think angel investing will start to bloom and that will help make it an additional investment class – which is what we hope to achieve in the longer term.

DNA: On the other side of the fence, investors say they cannot find good enough ideas/ people to bet on. As an angel investor yourself, is there substance to this contention?

It is important that we curate the better deals so that angels can discover good deal flows. In the future, they will be able to find deal flows themselves, but for now we need to help them.

Also, once we start our education programmes, angels will learn how to be better angels and how to find deals themselves too.

Hence, there is no substance to the notion that there are no good deals in Malaysia. There are, on the contrary, many good ideas and people to invest in.

DNA: Can you share any angel success stories this year so far?

Sivapalan: Depends on your definition of ‘success.’ If success here means an exit. then it is not possible to share much as this is still a very new area. After all, MBAN itself has only been actively promoting deal flows over the last five months.

However, some angels have done deals and have successfully exited, so it has happened before.

DNA Did MBAN put forth any recommendations for Budget 2016 [Malaysia’s national budget for next year] to help the sector? What happened?

Sivapalan: Yes, we did. In terms of the tax incentive, currently angels have to hold on to their investments for two years before they can claim it as a tax deduction. In the United Kingdom, for example, angels get the deduction the same year they invest, but it is limited to 30 per cent of the investment, up to £1 million (RM6.6 million at current rates).

We didn’t ask to claim back losses like in the United Kingdom, but we did request for the period to be shortened to either the same year of investment or in the following year.

We also asked for the incentive to be widened to more sectors as currently it is limited to a few tech sectors and doesn’t include greentech or biotech.

Finally, we also supported the Corporate Investment Tax Incentive proposed by the Technopreneur Association of Malaysia (TeAM) as this will allow groups of angels to syndicate deal-making via a corporate entity.

Although none of our proposals were approved, we know that these things take time and we will re-engage with the Government next year.

DNA: What will be the trigger point for angel investing to take off?

Sivapalan: We are already seeing a lot more interest in angel investing today, in terms of the number of HNWIs who have registered with MBAN, the number of angels attending our pitching sessions, and the discussions that are taking place among investors and entrepreneurs.

We believe the ball has started rolling and we want to give it an additional push via our educational programmes and curated deal flows.

Ultimately, when there are more success stories, then angel investing will really take off and we hope this will happen in the next two to three years.